How many award-winning strains have you ever come across? The Blue Widow is one of the most revered strains in the cannabis scene, and for good reasons: it has mouthwatering flavors, provides impressive yields, and offers potent cerebral and physical effects. Created over 50 years ago, this strain has stood the test of time to remain the go-to choice for many cannabis enthusiasts.

This winner of the 2013 Treating Yourself Expo Cannabis Cup and 2015 Copper Cannabis Cup should be top on your bucket list. The strain’s high resistance to pathogens and harsh climate make it ideal for beginner growers. Its fast-growing and high-yielding nature makes it ideal for commercial growers.  Here is everything you need to know about Blue Widow feminized strain.

What is the origin and genetic composition of the Blue Widow feminized strain?

Blue Widow feminized cannabis boasts of a rich history in genetic lineage, with the parent strains being Blueberry and White Widow. This strain is Indica-dominant and contains an average of 12-17% THC and less than 1% CBD.

Despite being Indica-dominant, the Blue Widow feminized cannabis grows up to 3 meters tall. The plant has numerous branches to support the many chunky green flower buds. As the plant matures, the leaves lose the thick green hues and become yellow to brown. The buds are covered in a thick layer of trichomes.

What are the effects of the Blue Widow feminized strain?

After a few tokes of the Blue Widow feminized blunt, a cerebral rush hits your nerves, leaving you euphoric, focused, and energetic. As the Sativa-induced “high” intensifies, you might become more talkative and ready for interaction. Despite being Indica-leaning, Blue Widow’s effects are more cerebral-centered. Consumers get to enjoy hours of cerebral stimulation, creativity, and focus.

These effects are eventually coupled with a potent but non-overwhelming body stone. Calmness, relaxation, and mental and physical peace become the norm for hours before sleep eventually takes over. Keep a bowl of snacks around to satiate the hunger caused by the Blue Widow cannabis strain.

Can the Blue Widow feminized strain be used medically?

Despite the low CBD content in Blue Widow feminized cannabis, the strain contains numerous therapeutic benefits. Cancer patients undergoing therapy have claimed that this strain alleviates nausea, which is a common symptom during chemotherapy.

The calming and happiness-inducing effects associated with this strain make it ideal for managing stress, anxiety, PTSD, and depressive symptoms. These mental conditions affect millions of individuals across the globe.

What does the Blue Widow feminized strain smell and taste like?

Blue Widow feminized marijuana is one of the most pungent strains on the cannabis scene. Before harvest, the buds produce a strong earthy and piney scent, which makes them stand out. If your olfactory nerves are super sensitive, you can identify fruity undertones.

After treating the buds, they hit you with a pungent cocktail of a similar scent with an additional citrusy aroma. Interestingly, this strain’s aroma does not change when you light it up for a session; it just gets more inviting.

Blue Widow feminized cannabis tastes as it smells. During inhalation, the strain lets out a strong sweet and fruity flavor. On the exhale, your taste buds remain with blueberry and citrusy flavor, with spicy and earthy notes lingering from a distance.

Blue Widow can thrive both indoors and outdoors, although it requires adequate space to thrive. This strain is similarly resistant to most pests and pathogens which attack cannabis plants. For best yields within a short period, it is advisable to use the Sea of Green (SOG) technique. Blue Widow completes flowering in 8-9 weeks and yields around 498 grams/m2.

On the other hand, when the strain is grown outdoors, it completes the flowering period in late September to early October, yielding about 1070 grams/plant, making it a go-to choice for commercial cannabis growers.

Creepers are a type of cannabis strain that is known for their high levels of THC. Some people even say that the high from a Creeper is comparable to that of a Blue Widow Feminized Cannabis Seed. 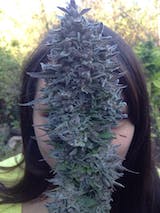 United Cannabis Seeds is a well-known and trusted name in the world of cannabis, and for good reason. They offer quality products at an affordable price, and the strains they carry are some of the best around. One such strain is Blue Widow Feminized Cannabis Seeds

Wow, what a plant. Great taste and great resistance! Love this Blue Widow!

Wow, what a plant. Great taste and great resistance! Love this !!!